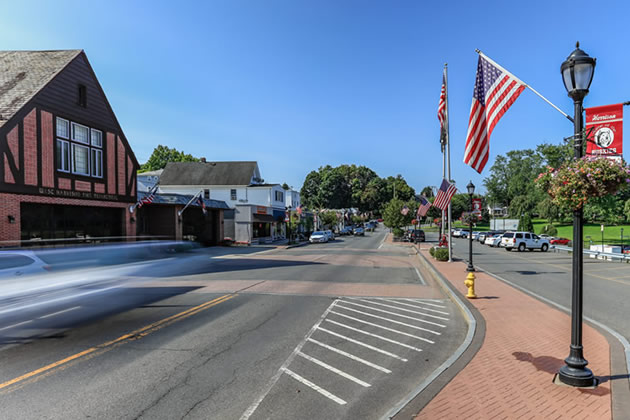 Places
Harrison: A Classic with a Timeless Story

Places
Harrison: A Classic with a Timeless Story

Harrison: A Classic with a Timeless Story

Harrison brings together the best of old and new for people who dream big.

Wedged into Westchester County’s southeast quadrant, the storied suburb sits just over half an hour from Manhattan by train, yet the grand scale of the community makes it seem worlds away. Encompassed within its boundaries are enchanting woodlands, golf courses, two college campuses—both universities of great renown—and the offices of such significant multinational corporations as MasterCard, PepsiCo and Pernod Ricard.  It has its own Metro North station, and access to the Hutchinson River/Merritt Parkway along with Interstates 287 and 84. In no way, however, does this incredible convenience compromise the the character of a town defined by leafy lanes marked with green-on-white Old English street signs and the bountiful stock of set-back Norman Tudors lining them.

Harrison is quite the character, really.  The town’s eponymous founder outlined its odd borders on horseback after being given 24 hours to claim whatever he could ride around.  Long before suburbia, the Battle of White Plains commenced on Merritt’s Hill within the town during the Revolutionary War, with an entire regiment of the Continental Army comprised entirely of Harrison locals. Even after the arrival of the railroad in 1848, industry bypassed the town, leaving a pristine and spacious landscape for later residential development.  Even after the train ran through town, it didn’t stop there until 1870—if a Harrisonite wanted a ride to Greenwich or New York, they’d literally have to flag it down like the hero of an old Western after a dastardly caped outlaw tied a damsel in distress to the tracks.  (That aforementioned convenience hardly happened overnight!)

While the town is often associated with pre-war Tudors, Harrison’s housing stock is quite diverse. The northern hamlet of Purchase abounds with modern-construction luxury homes on large lots. A common characteristic of all styles of residence in Harrison is a larger-than-average lot size, affording residents true solace.  (And if you’re wondering what the “Purchase” was: John Harrison’s, of that land he encircled way back in 1696).

For pleasure, Harrison sits conveniently between White Plains and downtown Greenwich, both home to world-class shopping and dining with distinctly different scenes.  Its oft-overlooked role as an academic community adds additional cultural benefits: shows at the Performing Arts Center at SUNY Purchase bring burgeoning talent right into our backyards.