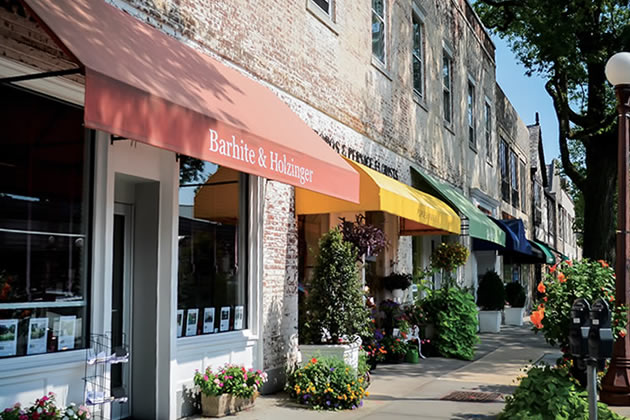 We talk about plenty of homes here, but there’s one that occupies a particularly special place in our hearts: our own.

There’s truly nowhere like Bronxville, a thriving community that, despite its 20-odd minute train ride from Manhattan, has over the past two centuries cultivated a unique cultural identity independent of the nearby metropolis. It’s a place where walk-to-town convenience meets majestic Manors, built to an equally grand scale as their country counterparts.

It’s where dashing financiers share sidewalks with the Sarah Lawrence liberal arts intelligentsia heading to read Rimbaud over espresso or intellectualize with their tweed-jacketed, elbow-patched professors at a sidewalk table. Ed McMahon lived here, and so did the Kennedys (JFK’s Harvard yearbook lists the family’s Pondfield Road address).

Winding Tudored lanes lead towards the manicured thoroughfares of the Village. Pondfield Road forms the heart of town, home to beloved staples like Womrath Books, Scalini Osteria and Slave to the Grind, a 90s-style college town coffeehouse seemingly straight out of Dead Poet’s Society. Eclecticism is elegance, it seems.

English Cotswold and French Normandy Tudors juxtapose Mission Revival—a vestigial reminder of the Hotel Gramatan, once regarded among America’s the finest and the dominant edifice in town (its salvaged bar survives at Slave to the Grind). Between upscale independently-owned boutiques and retailers, you might notice a more modern form of atelier, a studio filled with big screen iMacs and a full-wall mural of the Biggie Smalls lyric “If You Don’t Know, Now You Know.”

For us, it’s also where it all began, over 130 years ago. Our quaint abode at 4 Valley Road might look modest, but its history is far greater than its footprint, playing a pivotal role in defining the village surrounding it.

Before Bronxville, there was Underhill’s Crossing, named for the family of Colonials who settled the area and constructed a mill on the Bronx River. By the early 19th century, the discovery of treasured Tuckahoe marble triggered the first wave of steady development, and the New York & Harlem Railroad followed in 1844. It was about this time the old mill and 86 acres of Underhill lands came to be owned by a man named James Prescott, who purchased 86 acres of farmland that included Sunset Hill, which now overlooks the heart of the Village. Atop it, he erected Manor House, later guarded at the base of the knoll by a small gate lodge.

In 1888, while bringing his children to their country cousins, William Van Duzer Lawrence discovered Prescott Farm, which he purchased at the persistence of his brother-in-law. A wealthy Manhattan businessman, Lawrence’s firm, Perry Davis & Company, patented an elixir with a name cemented in our vernacular: “painkiller.” Marketing the product made him the fortune, but his second career in real estate would become his calling.

He developed the hilltop into Lawrence Park, an artist’s colony modeled after Barbizon in France’s Fontainebleau Forest. With the help of his creative right hand, architect William Bates, Lawrence laid down winding yellow-brick roads, meticulously carved out lots and built an archetypal embodiment of good taste still revered today. Manor House provided lodging for guests who traveled to taste the lifestyle and scope out home sites. The gate lodge became a sales office, and the sales arm became Houlihan Lawrence. We’ve grown a bit, but we’re still there today.

Landmark neighborhoods like Lawrence Park were hardly Lawrence’s only contributions to the community. After his young son nearly died traveling to New York City for medical care, he founded Lawrence Hospital, which continues to serve Westchester as part of the New York-Presbyterian network. In 1926, he founded Sarah Lawrence College, which ranks among America’s top liberal arts colleges. Past students and alumni have included such cultural icons as Barbara Walters, J.J. Abrams, Alice Walker, Yoko Ono and Arcade Fire frontman Win Butler.

The housing stock in Bronxville offers great aesthetic and functional diversity. Mr. Lawrence hired a balance of both prominent and casual architects to complete his developments in myriad sensibilities—Cotswold, French Norman, Shingle Style, American Craftsman—and that core value of variety holds true in town today. Steps from Metro North, you’ll find 600 square foot apartments, 6,000+ square foot estates and everything in between. The town’s more venerable homes have greatly been refreshed and modernized, including some of the hilltop Bates originals.

From its colorful past and predilection for timeless relevancy, Bronxville offers an easy commute and fulfilling lifestyle that brings enjoyment to your every day.