Fueling commerce, culture and industry, railroads dominated daily life for the better part of a century, making the unreachable reachable, setting new standards of luxury and, locally, fostering the growth of something near and dear to our hearts: the commuter suburb. (Fun fact: Mr. Lawrence acquired the deed to 4 Valley Road, our original headquarters in 1888, from Cornelius Vanderbilt). They were literally the engine that moved America, and their depots became engrained into the fabric of each community, a pulsing center of town town whisking workers and leisure-seekers alike to and fro Midtown Manhattan—a role they continue to play in our towns throughout Westchester, Connecticut and the Hudson Valley. When the MTA formed Metro North to assume operation of the Harlem, Hudson and New Haven lines in 1983, one of the first service improvements was adding high-level platforms for faster loading, rendering the old station houses obsolete in the process. Thankfully, many of of these venerable trackside structures were preserved to lead second lives as independently-owned shops, restaurants—even a Houlihan Lawrence brokerage office. Which will be your next stop?

IRVINGTON | Brrzaaar
Designed in 1889 by Shepley, Rutan and Coolidge, the Boston-based firm behind South Station and Harvard Medical School, Irvington's modest stone station house is also one of the coolest. Brrzaar arrived this April with its refreshing take on the self-serve froyo fad, serving up organic treats and coffee in a hip, highly-Instagrammable community cafe. Owner Michelle Leddy sources exclusively organic, non-GMO and gluten-free products sourced as locally as possible. And yogurt isn't the only thing they have a handle on: beans from nearby Double Barrel Roasters in Yonkers are brewed to perfection in what might be the first Bunn "Trifecta" (think of a single-serve Aeropress) in Westchester County. Rumor has it the building's recently restored umbrella sheds, which cover the original platform, may soon be available for patio seating.

VALHALLA | Valhalla Crossing
This longtime head-turner on the Taconic Parkway doesn't just occupy a train station, but an actual train. The popular eatery, serving feel-good food in an ambiance-filled atmosphere fit for its CIA-trained chef, envelops a 1910 Baltimore & Ohio caboose and historic 1896 Lake Shore & Michigan Southern Railway Presidential car, which short of the occasional Amtrak train passing through might just be the only operating railroad dining car in the Hudson Valley south of this Catskills dinner train.

DOBBS FERRY | Hudson Social
Buzzwords: live music, growler refills, hammered-copper pendant salvaged from a closed Manhattan restaurant you probably haven't heard of. This Hudson Line's gastropub carries a quintessentially Rivertowns vibe, with a New York Times review to prove it. Aromas of fresh hops, nuanced comfort foods and the river breeze waft through the vaulted ceilings of the old brick depot, luring an eclectic crowd of professionals, paperback-clutching hipsters and others  seeking to drive their forks into succulent slab of hanger steak amidst lively surrounds. There's even bottomless mimosa brunches on weekends.

PLEASANTVILLE | Iron Horse
This popular steady reopened after extensive renovations following its sale by its longtime proprietor/chef Philip McGrath (who still runs natural fast food spot Pony Express across the street). The new menu by David Barrera spotlights regional American cuisine and the decor has gotten a remix, too, with new railroad scenes by artist Judith Economos—her husband, Andrew, is the restaurant's owner. And in case you wonder why the station sits above the tracks, they were at street level until a 1950s grade separation project lowered them into that trench. 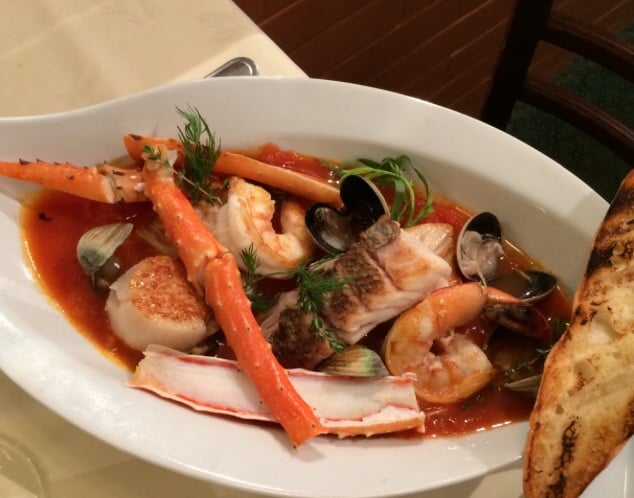 ELMSFORD | Casaletto
Don't try follow the tracks to this station. Elmsford's charming yellow depot was built to serve "Old Put," a lost train line linking Central Westchester with the city until 1958 (which John D. Rockefeller infamously footed the bill to relocate to keep coal smoke from wafting over Kykuit). While the train line is little more than memories and an extensive trail system, the station building thrives as Casaletto, a Zagat-rated Italian eatery specializing in both Northern and Neopolitan cuisine that Yelp is loving right now. The building previously housed another restaurant, Tony's La Stanzione, and an antique shop prior to that. 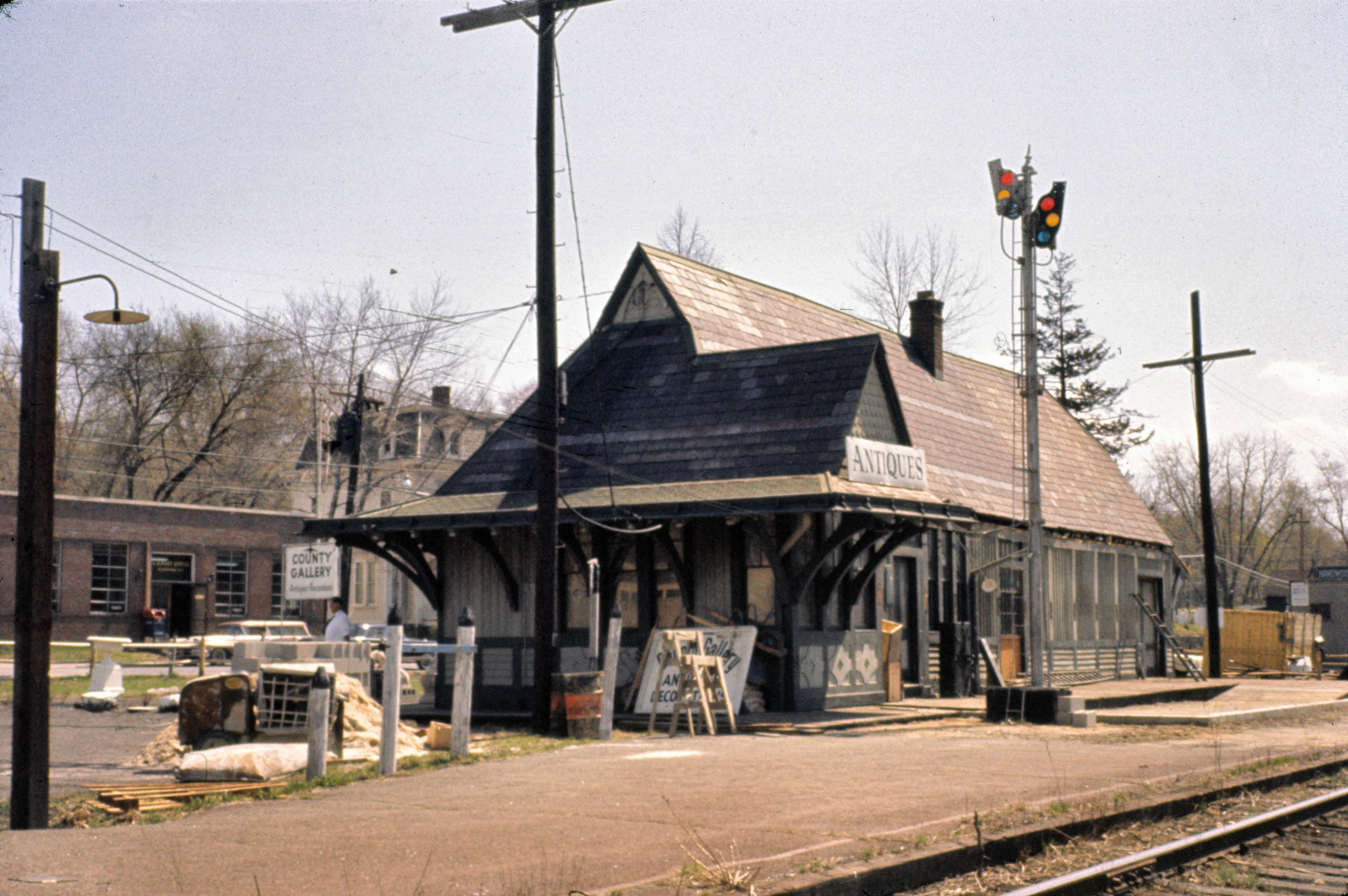 Elmsford station in 1963. The tracks remained to service a nearby A&P warehouse through the 1970s.
Credit: capntransit.blogspot.com

KATONAH | Peppino's Ristorante
Katonah's station, like the town, has always been a place on the move—first with the town's relocation in 1897 and again in 1984, when Metro North's third rail extension to Southeast replaced sooty old diesel trains with sleek, speedy electrics. Peppino's has long occupied the old building across Jay Street, serving up an authentic Italian menu in a romantic atmosphere preserving all the period detailing of the original waiting room. The occasional rumbling past of the Wassaic express signals a welcoming urban vibe not often felt in North County serenity.

MT. KISCO | Via Vanti!
You can expect good energy from a restaurant name with exclamation point, and Via Vanti! delivers. Touting itself as "improvisational Italian," the menu fresh spin on traditional classics—like the "LaZanni," a pasta-free lasagna with root vegetables, shiitake mushrooms, ricotta and chevre. The tasty trattoria is also a much-loved gelato spot, with 18+ rotating flavors like chestnut, Cointreau, salty caramel pretzel crunch and litchi (lychee) sorbetto. There's even live music on occasion. 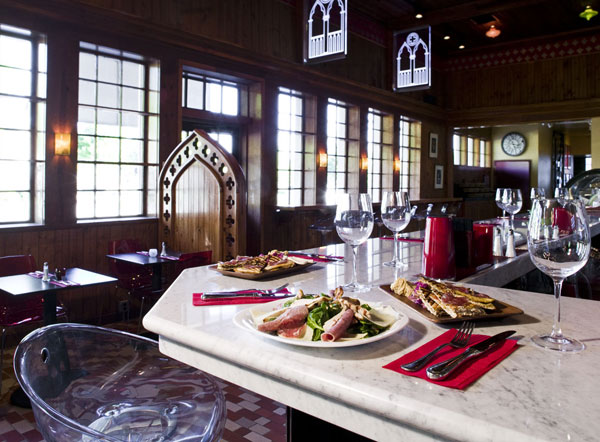 LAKE MAHOPAC | Freight House Cafe
Elsewhere on the phantom Putnam Division, this art-on-the-walls bohemian cafe is beloved by locals and North County Trail bikers alike. What was little more than a glorified c.1872 shed has been lovingly rebirthed by chef-owner Donna Massaro, serving both light and heartier fare including breakfast noshes, panini, smoothies and piping hot joe by Bear Mountain Coffee Roasters. Made in New York products are spotlighted, including artisan soaps, hand-blended teas from Hopewell Junction's Green Girl Herbs. Sip a selection of beer, wine or spirits to live music, or devour that caramelized banana Nutella flatbread outside in an Adirondack chair over a latte—it's a judgment free zone.