Considered by many the jewel of Westchester's river towns, Irvington is a place with a tangible past, exciting present and a future unfolding at the forefront of trends. Prosperous throughout its history, the scenic village, located in the Town of Greenburgh, is an embodiment of sophistication without pretension, distinctly cosmopolitan yet maintaining a small-town feel. From its picturesque neighborhoods to alluring Main Street—chain retailers notably absent—it doesn't take long to sense there's something different about Irvington one won't find elsewhere. While affluence is predominant, it attracts a unique diversity of personalities, drawing a mix of successful professionals, creative types and entrepreneurs alike. One could call it Westchester's West Village.

Irvington carries a colossal legacy of architectural significance, cultural contribution and quality of everyday life inextricably linked to the American dream. Popularized early as an idyllic commuter suburb for its riverfront location and close proximity to New York City, the arrival of the railroad enabled Manhattan's well-to-do to be whisked away 20 miles upriver to picturesque hilltop retreats, majestic vistas and sweeping sunsets over the Palisades. In the gilded age, the town's population burgeoned with America's great magnates of industry. John Jacob Astor III and Frank Jay Gould were residents, and the DuPonts owned land at the south side of town today occupied by Columbia University's Nevis Laboratory. Charles Lewis Tiffany, founder of the eponymous jeweler, built a riverfront compound on the site of today's Matthiessen Park. Andrew Jackson Downing paid several visits, and despite criticizing its street plan acknowledged it as "the perfect suburb," a place where all his canons could manifest. No denizen of Irvington, however, remains more celebrated than its namesake, author Washington Irving, who wrote wrote Ichabod Crane and Rip Van Winkle into literary immortality at his beloved Sunnyside estate north of town (which, by the way, we have a wonderful replica of for sale in Somers). 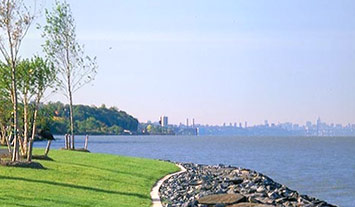 Red Hat on the River, located in a former factory building, is a longtime steady in town, serving full and brasserie menus.

Even manufacturing here carried an air of refinement. Lord & Burnham, the world's foremost builder of conservatories, once dominated the Bridge Street waterfront, where it constructed crystal palaces for some of the country's grandest private estates. The firm's countless commissions, including the New York Botanical Garden and San Francisco's Conservatory of Flowers, left Irvington by railcar in kit form. The sprawling factory survives as SoHo-style boutique loft office space, shared by a handful of tenants including design agency Flood Creative and fashion designer Eileen Fisher, who lives in town.

The housing stock in Irvington is a real study, with myriad century styles spanning more than three centuries represented in unrivaled concentration. Early 19th century showpieces in Carpenter Gothic and Hudson River Bracketed styles juxtapose Neoclassical, American Craftsman and Shingle-Style showpieces. The Armour-Stiner house, on the south side of the village, is among the last known example of an octagonal Victorian home in North America. New construction isn't unheard of, either.

Living in Irvington has other perks, too, like exclusive access to residents-only Matthiessen Park. Scenic Hudson Park beckons with an additional 12 acres of publicly-accessible riverfront greenbelt, and the Old Croton Aqueduct Trail, stretching from Van Cortlandt Park to the Croton Dam, passes to the east of Broadway.

Stop in our Irvington brokerage to learn more about this beautiful, dynamic and convenient community-on-Hudson.